The types of radiation transfer and nature of the greenhouse effect are explained in detail in lesson 1. Here, an overview is included in the context of climate change. The Sun emits energy in the form of visible light and ultra-violet (UV) radiation, which travels towards the Earth. Some of this energy is absorbed by the atmosphere, and some are reflected by the clouds back into space. The rest heats the Earth’s surface. The Earth is much cooler than the Sun and re-radiates this heat as infra-red (IR) radiation. Some of this IR radiation is trapped by greenhouse gases in the atmosphere, making the Earth warmer than it would be without an atmosphere. This is called the greenhouse effect.

Representation of the greenhouse effect. 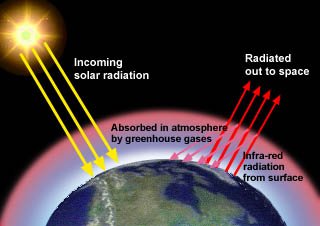 The key greenhouse gases and their main sources.

Man-made emissions of greenhouse gases come from a variety of sources including the burning of coal, oil, and gas (the fossil fuels), destruction of the world’s forests, vehicle exhausts fumes and aerosols. Carbon dioxide (CO2) is released when fossil fuels are burnt, and also through the destruction of the world’s forests. Although CO2 is not the most powerful greenhouse gas it has the greatest concentration in the atmosphere after water vapor. Since 1765, its concentration has increased by 30%. Methane (CH4) emissions come mainly from modern farming methods, but also coal mining, natural gas production, and waste landfill sites. Methane concentrations have increased over 100% since 1765. Nitrous oxide (N2O) emissions come from the productions of fertilizers, nylon, chemicals and the burning of fossil fuels. Chlorofluorocarbons (CFCs) are used in air conditioning units, plastic foams, and aerosol cans. CFCs are very powerful greenhouse gases compared to CO2. Even though the concentrations of CFCs in the Earth’s atmosphere are very small, their total effect is significant, because they trap much more radiation than CO2. CFCs also destroy the ozone layer. Water vapor (H2O) is the most abundant greenhouse gas. It plays a role in maintaining a stable temperature on Earth through the production of clouds.

Temperature records show the Earth has warmed by 0.5°C during the 20th century.

Temperature varies naturally from decade to decade and even from century to century. How can one be certain that the rise in temperature that is now occurring is due to mankind’s enhancing of the Earth’s natural greenhouse effect and not due to natural changes in the climate?

Scientists use computer models to simulate man-made climate change. The results show that the warming over the past 100 years is most likely to be due to mankind and that if we continue to emit greenhouse gases at the present rate the Earth will continue to warm by 1.5°C every 50 years. This does not sound like much, but it is useful to remember that the Earth warmed by only 5°C at the end of the last ice age; this warming took several thousands of years.

Reducing the threat of global warming

The effects of climate change could have serious impacts on the world. Sea levels may rise, affecting many low-lying coastal regions. Changes in the amount of rainfall will affect agriculture. The most at risk will be those least able to adapt to changes. To minimize these impacts, we must reduce emissions of the greenhouse gases. There is no more time for waiting and debating. Every one of us can try to help in reducing pollution as much as we can. We can turn off lights, use the solar panels to reduce our other heating sources, don’t throw plastic in water and other places, etc. Even changing how we entertain ourselves can have an effect. For example, playing casino games in online casinos, which you can find on this site, instead of physical establishments that are not so environmental-friendly.

There is much uncertainty about how climate change will affect us, but scientists and governments believe that we must start reducing greenhouse emissions now. The Framework Convention on Climate Change (FCCC) represents the first step to achieve this goal. Signed in June 1992 at the Rio Earth Summit, by 162 Governments, the FCCC aimed to reduce greenhouse gas emissions to 1990 levels by the year 2000. In 1997, Governments drew up the Kyoto Protocol which now commits nations to reduce greenhouse gas emissions by 5% from 1990 levels by the year 2012.