Weather due to air cooling

Many of the common phenomena of weather: clouds, frost, fog, and rain – are due to the cooling of air and the consequent condensation of excess water vapor. The last section looked at how water vapor gets into the atmosphere, and how it is returned to the liquid state, either in the atmosphere as clouds and fog or back to the Earth’s surface as rain, hail, and snow. In the next two lessons, further investigation is made into the different mechanisms of air cooling, and the different types of weather that these produce. The first of these is dew and fog. Both phenomena develop from the cooling of air by contact with the Earth’s surface.

When the Sun sets, the Earth and any other radiating body upon it continue to radiate heat from their supplies. With no heat from the Sun to replenish their stocks, their temperature falls. The maximum loss of heat occurs when there is no overhead shelter to prevent the radiation from escaping into the atmosphere. The most significant single deterrent to radiation cooling is a blanket of cloud. Long-wave heat energy radiated from the Earth is absorbed by the fine water droplets of clouds, which in turn radiate some of the heat back again to Earth.

As the surface temperature falls under a clear sky, the air in closest contact with it begins to cool. Very slowly this drop in temperature is transmitted to air layers higher up. Eventually, the surface air temperature will fall low enough to condense water vapor out as dew. Sometimes the temperature of the air near the surface drops below that of the air slightly higher up creating a temperature inversion. Without any wind, the dense cold surface air will remain to squat near the ground, and considerable dew formation may take place. Dew forms most easily over grass because the thin layer of air next to it is always moist (due to evapotranspiration).

Dew on a leaf

When the dew point of the cooling air below is 0°C, hoar frost results from radiation cooling instead. Condensation occurs directly as a crust of white crystals. If the air is particularly dry, its dew point may be well below freezing. While an air frost may occur, hoar frost will be absent if the air temperature does not fall below the dew point. Farmers and gardeners must be particularly wary of frost for it can damage crops and pants. Since cooling air will always drain downhill if possible, valleys and hollows suffer the greatest risk from frost. Coastal areas benefit from the moderating influence of the warmer sea. (Remember that the sea is greater storage of heat than land and it releases this heat more slowly).

Sometimes a much thicker layer of air may be moist, and then condensation can occur throughout, giving rise to fog. With no wind at all, fog will form first as shallow streaks near the ground. More usually there is a little prevailing wind serving to spread the ensuring fog evenly within one or two hundred meters of the ground. The moister the air, the greater the likelihood of fog forming under clear skies at night. As with frost, fog formation is most likely in low-lying grounds and hollows, least likely on hill tops.

Usually, wind serves to prevent or restrict the formation of dew, frost or fog. This is because a steady flow of air over the cooling surface does not remain in contact with the ground long enough to cool below its dew point for condensation to occur. The one occasion when the wind does not deter condensation is when warm air from different sources passes over a much colder surface. This often occurs in winter in Britain when moist warm southwesterly return after a cold spell influenced by easterly continental air. The warm air meeting the colder surface will cool below its dew point releasing condensation as fog. Sea fog can be a common occurrence in coastal areas when warmer sea air comes inland passing over colder land. Sometimes, the opposite can occur, when warm air from a continental interior comes into contact with a cold coastal ocean current. This is especially common along the coast of California, USA (see figure 5.3). 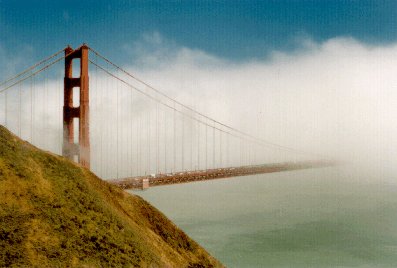