Why measure the weather?

In everyday language weather means such qualities as wet or fine, warm or cold. For most people, such descriptive terms are adequate. However, many industries today require more quantitative assessments of the weather, with the use of standardised terms measured by suitably designed instruments. The science of the study of weather is called meteorology; the meteorologist measures temperature, rainfall, pressure, humidity, sunshine and cloudiness, and makes predictions and forecasts about what the weather will do in the future.

The hotness or coldness of a substance is called its temperature and is measured with a thermometer. The ordinary thermometer consists of a hollow glass bulb attached to a narrow stem with a thread-like bore. The bulb is filled with liquid, usually mercury, but also alcohol when very low temperatures need to be measured, which expands when the temperature rises and contracts when the temperature falls. The amount of expansion and contraction is measured by a calibrated scale. 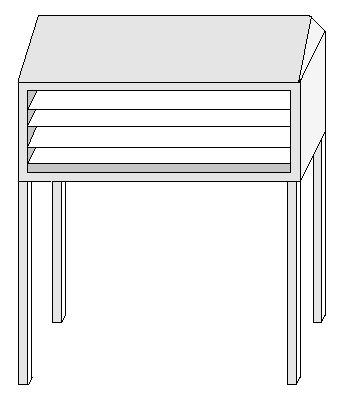 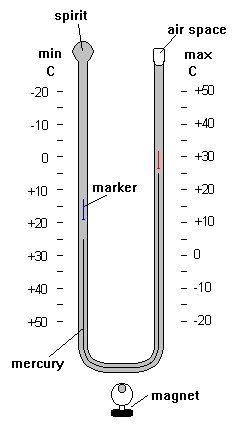 Like all fluids, the air exerts a pressure on everything within and around it, although we are not aware of it. Pressure is a force, or weight, exerted on a surface per unit area, and is measured in Pascals (Pa). The pressure exerted by a kilogram mass on a surface equals 9.8 Pa. The pressure exerted by the whole atmosphere on the Earth’s surface is approximately 100,000 Pa. Usually, atmospheric pressure is quoted in millibars (mb). 1mb is equal to 100 Pa, so standard atmospheric pressure is about 1000mb. In fact, actual values of atmospheric pressure vary from place to place and from hour to hour. At sea level, commonly observed values range between 970 mb and 1040 mb. Because pressure decreases with altitude, pressure observed at various stations must be adjusted to the same level, usually sea level.

An aneroid barometer is a more compact instrument for measuring pressure. It consists of a box of partially exhausted air which expands and contracts as the pressure falls and rises. The box is connected through a system of levers to a pointer which, in conjunction with a dial, indicates the pressure.

Variations in atmospheric pressure lead to the development of winds that play a significant role in shaping our daily weather. 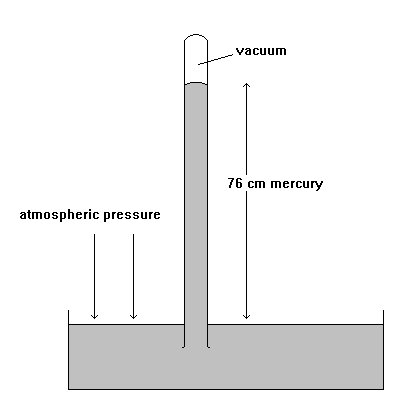 Some water in the form of invisible vapour is intermixed with the air throughout the atmosphere. It is the condensation of this vapour which gives rise to most weather phenomena: clouds, rain, snow, dew and fog. There is a limit to how much water vapour the air can hold and this limit varies with temperature. When the air contains the maximum amount of vapour possible for a particular temperature, the air is said to be saturated. Warm air can hold more vapour than cold air. In general the air is not saturated, containing only a fraction of the possible water vapour.

The amount of vapour in the air can be measured in a number of ways. The humidity of a packet of air is usually denoted by the mass of vapour contained within it, or the pressure that the water vapour exerts. The variation of absolute humidity (vapour content of saturated air) with temperature is shown in the figure below.

Variation of absolute humidity with temperature When unsaturated air is cooled, relative humidity increases. Eventually it reaches a temperature at which it is saturated. Further cooling leads to condensation of the excess water vapour. The temperature at which condensation sets in is called the dew point. The dew point, and other measures of humidity can be calculated from readings taken by a hygrometer. A hygrometer has two thermometers, one dry bulb or standard air temperature thermometer, and one wet bulb thermometer. The wet bulb thermometer is an ordinary thermometer which has the bulb covered with a muslin bag, kept moist via an absorbent wick dipped into water. Evaporation of water from the muslin lowers the temperature of the thermometer. The difference between wet and dry bulb temperatures is used to calculate the various measures of humidity.

The air is nearly always in motion, and this is felt as wind. Two factors are necessary to specify wind, its speed and direction. The direction of wind is expressed as the point of the compass from where the wind is blowing. Air moving from the north-east to the south-west is called a north-east wind. It may also be expressed in degrees from true north. A north-east wind would be 45. A south-west wind would be 235. The wind speed can be expressed in miles or kilometres per hour, meters per second, knots or as a force on the Beaufort scale.

The amount of rain, sleet, snow or hail which falls in a specified time is expressed as the depth of water it would produce on a large, level impermeable surface. Usually it is expressed in millimetres although inches may sometimes be used. Rainfall is measured daily (24 hours) by means of a rainguage. Today’s rainguages are simple to use with pre-calibrated scales on their sides. When measuring rainfall, certain precautions have to be taken against the effects of obstructions, wind, splashing and evaporation.

Many weather stations record the amount of bright sunshine during daylight hours. A typical measuring instrument is the Campbell-Stokes sunshine recorder. This consists of a glass ball which focuses the Sun’s rays, burning a hole in an index card. As the Sun moves around the sky, so the burnt hole extends along the index, which is marked in hours to record the amount of direct sunshine.