The “cause” of weather

Weather is caused by the movement or transfer of energy. Energy is transferred wherever there is a temperature difference between two objects. There are three main ways energy can be transferred: radiation, conduction and convection.

Usually we cannot differentiate between the different wavelengths of sunlight, and the light appears white, but they become visible in a rainbow. In a rainbow we see seven colours. In order of decreasing wavelength these are red, orange, yellow, green, blue, indigo, violet. We cannot see electromagnetic energy that has a longer wavelength than red (infrared) or a shorter wavelength than violet (ultraviolet). 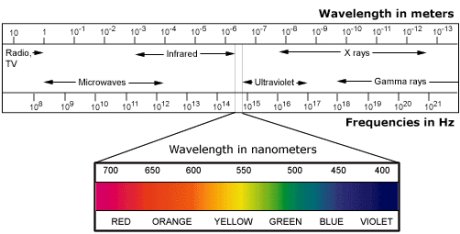 Why is the sky blue?

The Earth’s sky is blue because the air molecules (largely nitrogen and oxygen) are much smaller than the wavelength of light. When light encounters particles much smaller than its wavelength, light is scattered in all directions. This scattering is known as Rayleigh scattering. Blue light, however, is much more readily scattered than light of longer wavelength. In fact blue light is scattered some 16 times more strongly than red light. Consequently, the sky appears blue. Rayleigh scattering also provides the explanation for the colour of skies at dusk and dawn. A setting or rising Sun appears red because the blue light has been scattered away from the direct sunlight.

Occasionally, other colours of the sky can be seen. These are caused by the scattering of light by particles much bigger than air molecules, sometimes larger than the wavelength of light. Dust particles, from natural or man-made pollution, can be many times larger than air molecules but still small enough to not fall out to the ground. If the dust particles are much larger than the wavelength of light, the scattered light will be neutral in colour, for example white or gray. By the same principle water molecules in clouds are sufficiently large to scatter all wavelengths equally. Therefore the scattered light contains all wavelengths and clouds appear white.

If the dust particles are of approximately the same size as the wavelength of light, all sorts of interesting scattering phenomena may happen. This happens here on Earth from time to time, particularly in desert areas, where the sky may appear white, brown, or some other colour.

The transfer of radiation may be accomplished by direct absorption by the cooler object of energy emitted by the warmer one. Food placed under a grill absorbs energy radiated from the heating elements. Similarly, the Earth absorbs energy emitted from the Sun. How much the cooler object heats up depends upon the nature of that object. Certain materials like rock require much less energy to raise their temperature than others, such as water. That is to say, water has a larger heat capacity than rock (about 5 times larger).

Transfer of radiation: reflection and scattering

Transfer of radiation can occur in other ways besides absorption. Certain material bodies, for example glass or pure air, are transparent to visible radiation (light), allowing the energy to pass straight through without absorption. This is not the case for infrared radiation, which is trapped (absorbed) by glass and certain greenhouse gases. Other material bodies neither absorb nor allow through radiation, but reflect it back. Light surfaces such as snow and ice are good reflectors of visible radiation. Dust in the atmosphere scatters radiation. The blue of the sky is due to the scattering of the blue part of visible light from the Sun by air molecules, the reds and yellows of sunset are due to scattering by dust particles.

Transfer of energy can also be made by conduction, if two objects are in contact. A heating element of a kettle heats its water by conduction of energy. Metal is a good conductor, as is water. Air is a poor conductor of energy and therefore acts as a good insulator, as, for example, between the outer and inner skins of a cavity wall house, or between the human body and outside air by air spaces between fibres of clothing.

Convection of energy involves the movement of the body storing the energy. Clearly, convection can only occur in fluids – liquids and gases. Both air and water act as convecting agents for the transfer of energy. Because air is a poor conductor of energy, convection is a major process of energy movement in the Earth’s atmosphere. In the atmosphere, convection occurs when a shallow layer of air in contact with a hot surface warms by conduction, acquires buoyancy (warmer air is less dense than colder air), and rises, taking with it the energy that it stores.

Movement of radiation in the atmosphere

In a weather context, energy radiated from the Sun is distributed at the Earth by absorption, conduction, convection, reflection and scattering. The Sun radiates energy at a rate which, for practical purposes, is unchanging. Most of this radiation is visible light and ultra – violet energy. At the outer limit of the Earth’s atmosphere, the radiation received is 1370 watts per square metre. This is called the solar constant. Passing through the atmosphere it is depleted in various ways.

This warming effect is called the “greenhouse effect” because it is the same process as that which occurs in a greenhouse on a sunny day. The glass is transparent to short-wave radiation but absorbs the outgoing long-wave radiation, causing a rise in temperature inside the greenhouse. Water vapour and carbon dioxide are called “greenhouse gases”. Other greenhouse gases include methane and CFCs from aerosol cans.

Convection in the atmosphere

Heat energy in the atmosphere is also transferred by convection as described above, with the heating and ascension of surface air. Such convection processes in a large part dominate the world weather, including the production of rain and snow, thunderstorms, hurricanes and frontal systems. How many of these weather phenomena originate will be the topic of the following lessons in this section.