Whilst dew, frost and fog are types of condensation resulting from cooling by contact with the Earth’s surface, clouds and rain are caused by cooling from mechanical uplift. There are three main ways by which uplift of air can occur: convection, front and orographic (mountain) uplift. In each case, the rising air is forced to cool by expansion, releasing condensation first as cloud, and if uplift and cooling continues, as rain, hail or snow.

The most powerful lifting mechanism is initiated by the heat of the Sun. When the Sun heats the Earth’s surface, successive warming of shallow layers in contact with the ground takes place. The buoyancy of this heated air generates thermal up – currents. Down – currents follow as a necessary consequence, to fill the voids left by the up-currents. This process is called convection.

The volume of rising warm air increases as the surrounding atmospheric pressure falls, cooling as heat is consumed during expansion. If the rising air is dry or unsaturated it will cool at the dry adiabatic lapse rate, 9.8°C for every 1 kilometre increase in altitude. Sooner or later, depending on its vapour content, the dew point will be reached and condensation will occur forming convection clouds or cumulus clouds. 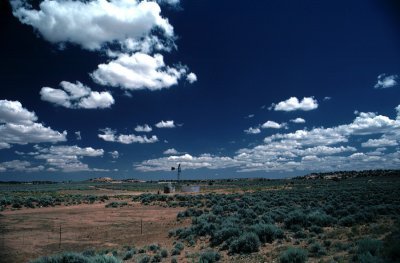 Cumulus clouds look like white fluffy balls of cotton wool and mark the vertical extent of convection. The level at which condensation begins is defined by the cloud base, and its height will depend upon the humidity of the rising air. The more humid the air, the lower the cloud base. Provided that the air is still warmer than the surrounding atmosphere, air will continue to cool, now at the reduced saturated adiabatic lapse rate, building up a thickness of cloud. The depth of the cloud which forms depends upon the buoyancy conditions of the day. Air can only continue to rise whilst its temperature is warmer than that of the surrounding air.

Small cumulus clouds are evidence of relatively stable air. Once condensation begins, uplift continues only for a short distance before the temperature of rising air falls below that of the surrounding atmosphere. Since cumulus clouds have no existence apart from thermal convection, they are diurnal clouds when over land, forming mid morning and disappearing again after sunset. They may also form over sea when the sea surface temperature is warmer than the air passing over it. Then similar convection currents can develop.

When the surrounding air cools significantly with altitude, rising packets of air will continue upward, cooling first at the dry adiabatic lapse rate, and then on cloud formation, at the saturated adiabatic lapse rate. Uplift of the air may continue several kilometres before losing buoyancy, forming large towering clouds called cumulonimbus. Under such conditions, the atmosphere is said to be unstable. In general, a northerly air stream, moving southwards (in the northern hemisphere) and therefore warming at its lower level, will have a large temperature range with height and be unstable. Conversely, a southerly airstream, moving northwards and therefore cooling at its lower level, will have a relatively narrow temperature range with height and be stable.

Generally, cumulus clouds forming in stable air produce no precipitation. During the formation of the larger cumulonimbus, condensation droplets are carried up and down several times within the convection currents inside the cloud before being released, generally coalescing to form rain drops. The more vigorous the thermal currents inside the cloud, the larger the rain drops which form. Light showers can fall form modest-sized “cauliflower” clouds whilst the larger cumulonimbus clouds can produce heavy downpours. The largest cumulonimbus clouds of all are found in thunderstorms. In these clouds, up-currents are so severe that splitting of rain drops and ice crystals can occur before re-coalescing and falling to the ground. It is believed that this may contribute to the build up of electric charge and the occurrence of lightning.

When huge masses of air come together from different directions, uplift and cooling of air with cloud formation and rain can occur, if differences exist in temperature and humidity between the two air masses. They cannot mix together immediately owing to their different densities, any more than two liquids like water and oil. Mixing takes time. In the meantime, the lighter, warmer air mass begins to rise above the cooler, denser one. The boundary between the two air masses is called a front. Fronts are usually several hundred miles long and emanate from the centre of low pressure systems or depressions. There are warm fronts, cold fronts and occluded fronts.

A warm front exists when warm air is rising over cold air. In vertical cross-section, the boundary takes the form of a gradual slope (roughly 1:100) and lifting is slow but persistent. As the airlifts into regions of lower pressure, it expands, cools and condenses water vapour as flat sheet cloud (altostratus), from which rain can start to fall once cloud has thickened to about 2,500m from the ground. Cloud continues to lower towards the boundary at ground level, known as the surface front. This lower level cloud is called stratus or nimbostratus, from which appreciable amounts of rain may fall. Sometimes, nimbostratus cloud may be only a few hundred metres above the ground, and can completely cover hill tops and mountains.

Because frontal systems have a velocity of their own, an observer on the ground will witness a succession of cloud types with cloud gradually thickening before rain arrives. These tell-tale signs can be used by the observer to predict the onset of bad weather within a few hours. When the surface front arrives, there may be a burst of rather heavier rain, and this offers a hopeful sign that a drier interlude is on the way. Clouds will break, rain cease, and there may be a noticeable rise in temperature as the warm air engulfs the observer.

A warm front in cross section

A cold front exists when cold air following warm air undercuts the warm air, heaving it upwards with a more violent thrust compared to the steady rise of air at a warm front. The air associated with a cold front is usually unstable and conducive to cumulonimbus formation. Because the upthrust is delivered along a boundary between the two air masses, the cumulonimbus forms a well-defined line in contrast to the well-spaced clouds forming during thermal convection. Usually, rainfall associated with cold fronts is in the form of heavy deluge; more rain may fall in a few minutes as the cold front passes than during the whole passage of a warm front. As the cold front passes, the clouds roll by and the air temperature may become noticeably cooler.

A cold front in cross section

There is a favourite meeting place in the mid-Atlantic for cold polar air and warm sub-tropical air. Here, due to the rotation of the Earth, low pressure systems or depressions develop, usually with well defined warm and cold fronts, as the warm air is forced up over the cold air. Fronts and depressions have a birth, lifetime and death; and according to the stage at which they are encountered, so does the weather intensity vary.

A schematic of depression formation

Cold fronts usually travel faster than warm fronts, and therefore at some stage of depression development, the cold front catches up with the warm front. In cross section, the warm air is lifted right off the ground, so that the observer misses out the warm sector stage. This is known as an occlusion or occluded front.

In addition to convection and frontal uplift there is a third lifting mechanism which produces cloud, and sometimes precipitation on its own, or accentuates cloud and precipitation which already exists. This is the necessary lift air must make to surmount large obstacles which obstruct its passage. On an otherwise clear day, lift over hills and mountains maybe enough to produce stratus clouds over their tops. As the air descends over the other side, the clouds may dissipate. If the air is fairly humid, considerable precipitation maybe generated over hills and mountains. Once past these obstructions, precipitation ceases as the air warms up and condensation returns to its vapour state. On the leeward side of mountain ranges, rain shadows can exist where little precipitation penetrates.