There is always water vapor present in the atmosphere. Lesson 3 demonstrated that when air rises and cools, it becomes saturated and releases water vapour as condensation. This condensation is the source of all clouds and rain. Water vapour enters the atmosphere by evaporation from surface bodies of water. These include puddles, ponds, streams, rivers, lakes and oceans. Water also enters the atmosphere by evapotranspiration from plants and trees. The water vapour is returned to the surface in rain, hail, sleet or snow, where it is returned to the soil for uptake by vegetation or to surface streams, rivers and lakes and ultimately by the sea. This cycle of evaporation, condensation and precipitation is called the water cycle of the Earth and atmosphere. 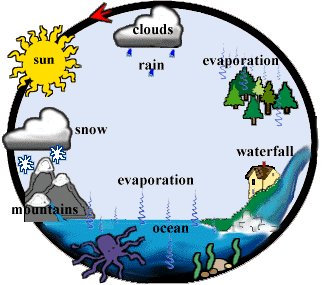 Evaporation of water from the Earth’s surface forms one part of the water cycle. At 100°C, the boiling point, all water will rapidly be turned to vapour, for the energy supplied to the water is enough to break all the molecular bonds in water apart. At temperatures between 100°C and 0°C, only some of the molecules in the water have enough energy to escape to the atmosphere and the rate at which water is converted to vapour is much slower.

The rate of evaporation will depend upon a number of factors. Rates increase when temperatures are higher; an increase of 10°C will approximately double the rate of evaporation. The humidity of the surrounding air will also influence evaporation. Drier air has a greater “thirst” for water vapour than humid, moist air. It follows, therefore, that the presence of wind will also increase evaporation. On still days, water evaporating to the air remains close to its source, increasing the local humidity. As the moisture content of the air increases, evaporation will diminish. If, however, a steady flow of air exists to remove the newly formed vapour, the air surrounding the water source will remain dry, “thirsty” for future water.

All air contains water vapour of varying quantities. The lower the air temperature, the smaller the maximum possible capacity for vapour. When air is cooled, relative humidity increases, until at a particular temperature, called the dew point, the air becomes saturated. Further cooling below the dew point will induce condensation of the excess water vapour.

The temperature of the dew point will depend upon the absolute content of water vapour, that is the absolute humidity, measured in g/m3. The dew point of humid air will be higher than the dew point of dry air. Both air temperature and absolute humidity will determine what type of condensation will occur when the air is cooled. If air in contact with the ground is cooled to its dew point, dew or frost will form, dew if the point is above 0°C, or frost if it is below 0°C. Cooling of a larger layer of air near to the ground may produce mist of fog, which freezes if the dew point is below 0°C. Air that is cooled to its dew point by rising and expansion will condense to form clouds. Above 0°C, small droplets of water are formed. Condensation may also result in ice crystals at temperatures well below 0°C. When temperatures are near or a little below 0°C, supercooled water droplets can form.

Condensation in an air layer as a result of limited cooling produces water drops (or ice crystals) of such small size that they remain suspended in air. If cooling continues, as may happen when the atmosphere is unstable, the small liquid drops will coalesce to form larger drops, ice crystals cling together to form snowflakes and supercooled drops freeze on contact with ice crystals. Eventually such combinations become weighty enough to fall out of the cloud. Some precipitation may evaporate again before reaching the ground. The rest falls as rain if temperatures are high enough to melt ice crystals, or snow if ground or mountain top temperatures are below 0°C. Hail forms when large drops are tossed up and down in strong vertical currents within a cloud, alternatively collecting additional water and then freezing, until ice stones acquire sufficient weight to overcome the upthrusting air currents and fall to the ground.