Although air is well mixed throughout the atmosphere, the atmosphere itself is not physically uniform but has significant variations in temperature and pressure with altitude, which define a number of atmospheric layers. These include the troposphere (0 to 16 km), stratosphere (16 to 50 km), mesosphere (50 to 80km) and thermosphere (80 to 640km). The boundaries between these four layers are defined by abrupt changes in temperature, and include respectively the tropopause, stratopause and mesopause. In the troposphere and mesosphere, temperature generally falls with increasing altitude, whilst in the stratosphere and thermosphere, temperature rises with increasing altitude.

In addition to temperature, other criteria can be used to define different layers in the atmosphere. The ionosphere, for example, which occupies the same region of the atmosphere as the thermosphere, is defined by the presence of ions, a physico-chemical criterion. The region beyond the ionosphere is known as the exosphere. The ionosphere and the exosphere together make up the upper atmosphere (or thermosphere). The magnetosphere is the region above the Earth’s surface in which charged particles are affected by the Earth’s magnetic field.

Another well-known layer of the atmosphere is the ozone layer, occupying much of the stratosphere. This layer is defined by its chemical composition – where ozone is especially abundant.

Layers of the Atmosphere 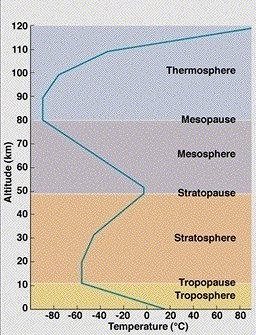 The lowest layer of the atmosphere is called the troposphere. It ranges in thickness from 8km at the poles to 16km over the equator. The troposphere is bounded above by the tropopause, a boundary marked by stable temperatures. Above the troposphere is the stratosphere. Although variations do occur, temperature usually declines with increasing altitude in the troposphere. Hill walkers know that it will be several degrees cooler on the top of a mountain than in the valley below.

The troposphere is denser than the layers of the atmosphere above it (because of the weight compressing it), and it contains up to 75% of the mass of the atmosphere. It is primarily composed of nitrogen (78%) and oxygen (21%) with only small concentrations of other trace gases. Nearly all atmospheric water vapour or moisture is found in the troposphere.

The troposphere is the layer where most of the world’s weather takes place. Since temperature decreases with altitude in the troposphere, warm air near the surface of the Earth can readily rise, being less dense than the colder air above it. In fact air molecules can travel to the top of the troposphere and back down again in a just a few days. Such vertical movement or convection of air generates clouds and ultimately rain from the moisture within the air, and gives rise to much of the weather which we experience. The troposphere is capped by the tropopause, a region of stable temperature. Air temperature then begins to rise in the stratosphere. Such a temperature increase prevents much air convection beyond the tropopause, and consequently most weather phenomena, including towering cumulonimbus thunderclouds, are confined to the troposphere.

The stratosphere is the second major layer of the atmosphere. It lies above the troposphere and is separated from it by the tropopause. It occupies the region of atmosphere from about 12 to 50 km, although its lower boundary tends to be higher nearer the equator and lower nearer the poles.

The stratosphere provides some advantages for long-distant flight because it is above stormy weather and has strong, steady, horizontal winds.

The stratosphere is separated from the mesosphere above by the stratopause.

Temperatures in the mesosphere drop with increasing altitude to about -100C. The mesosphere is the coldest of the atmospheric layers. In fact it is colder then Antarctica’s lowest recorded temperature. It is cold enough to freeze water vapor into ice clouds. You can see these clouds if sunlight hits them after sunset. They are called Noctilucent Clouds (NLC). NLCs are most readily visible when the Sun is from 4 to 16 degrees below the horizon.

The mesosphere is also the layer in which a lot of meteors burn up while entering the Earth’s atmosphere. From the Earth they are seen as shooting stars. The dark blue layer next to the blackness of space in the image below is the mesosphere. In fact the upper atmosphere extends much further out, into the thermosphere.

Ionisation of air molecules in the ionosphere is produced by ultraviolet radiation from the Sun, and to a lesser extent by high-energy particles from the Sun and from cosmic rays.

On certain nights at high latitudes shifting patterns of light may been seen in the sky. These are the aurorae. The bright lights are caused by high-energy particles streaming out from the Sun – the solar wind – striking the Earth’s upper atmosphere or ionosphere. Energy from these electrically charged particles is converted into light, forming visible glows, rays, arcs, bands and veils. This light is usually greenish, but is sometimes red as well. The charged particles are attracted by the Earth’s magnetic field. Near the magnetic poles, the Earth’s magnetic field becomes much stronger. Consequently, it is nearer the magnetic poles that the aurorae are most frequently witnessed.

The power of aurorae depends mostly on the strength of the solar wind. During an intense solar storm, the wind can intensify very strongly, and aurorae may be seen at lower latitudes further from the magnetic poles. Every 11 years, at the peak of the sunspot cycle there is an increase in intensity of the solar wind, and with it, an increase in frequency and intensity of auroral displays.

Aurorae occur in both the Northern and Southern Hemispheres. In the Northern Hemisphere, the display is known as the aurora borealis, or northern lights. In the Southern Hemisphere, it is called the aurora australis, or southern lights. The term aurora polaris, polar lights, is a general name for both. Aurorae are usually visible from within the Arctic or Antarctic circles – Antarctica, Greenland, Iceland and Northern regions of Canada, Alaska, Scandinavia and Russia. During times of more intense activity on the Sun, auroral storms can be viewed at lower latitudes such as northern Scotland and most of Norway, Sweden and Finland. Very rarely displays can be seen from northerly parts of Europe and the United States.