The Movement of Air

Wind due to differences in pressure

Wind due to pressure differences

Wind due to differences in temperature

Temperature differences at the Earth’s surface occur wherever there are differences in surface substances. A dark tarmacked surface will heat up more quickly on a sunny day (i.e. absorb more solar radiation) than a grassy field. Similarly, along the coast, large areas of land heat up more quickly than adjacent sea water (water has a large heat capacity and is a good conductor of heat). Air near the land surface is heated by radiation and conduction, expands and begins to rise, being lighter than the surrounding air. This is convection. To replace the rising air, cooler air is drawn in from the surface of the sea. This is advection, called a sea breeze, and can offer a pleasant cooling influence on hot summer afternoons when further inland the heat may become oppressive.

Air above the sea sinks and is again pulled in over the land. The full sea breeze circulation is shown below. A very hot summer sun may cause a sea breeze of up to 15 mph along the coast, felt in decreasing strength 20 to 25 miles inland.

Since the sea breeze owes its existence to the enhanced heating of the land under the sun, it follows that at night, when the land cools faster than the sea, a land breeze may develop. In this case, it is air above the warmer surface water that is heated and rises, pulling in air from the cooler land surface.

Inland on clear nights when the surface looses considerable radiation, surface cooling serves to set up air movements wherever there are undulations of contour. As the air becomes colder, it contracts and sinks down as far as it can move, settling into hollows, drifting down slopes and blowing down mountain sides. Large scale air movements of this nature are called Katabatic winds.

On a global scale, the same principle of temperature difference operates to develop the major wind belts. Large volumes of air rise over the equator where most solar radiation is directed, creating a demand for colder air from higher latitudes. This however, is an oversimplification of the cause of global weather. The presence of large continental land masses and vast expanses of ocean introduce further complexities to the global air movements. These are looked at in lesson 9. 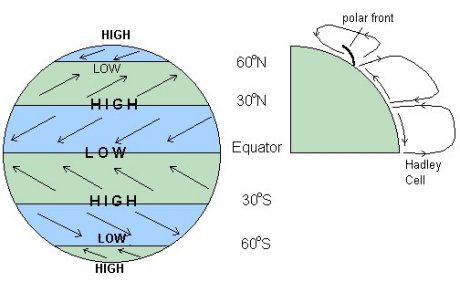 Because the basic mechanism for raising air temperature occurs at ground level with the heating of the surface by the Sun, temperatures are generally higher near the Earth’s surface than further away. Nevertheless, local variations exist, caused by the slow mixing of air. Sometimes, air temperature decreases rapidly with altitude, sometimes more slowly. Occasionally, air temperature may even increase with altitude for a short distance.

As discussed, when a packet of air near the earth’s surface is heated, it rises, being lighter than the surrounding air. Whether or not this air packet continues to rise will depend upon how the temperature in the surrounding air changes with altitude. As convection continues, air pressure begins to fall, and the air packet expands. Such expansion results in loss of heat and consequent fall in temperature. (Similarly, when air descends the air compresses and its temperature rises.) The rate at which air on expansion cools is called the adiabatic lapse rate, and for dry air it is equal to 9.8C per kilometre. Adiabatic means that the air exchanges no heat with its surroundings, a condition very nearly true for rising and descending packets of air.

This website uses cookies to improve your experience while you navigate through the website. Out of these, the cookies that are categorized as necessary are stored on your browser as they are essential for the working of basic functionalities of the website. We also use third-party cookies that help us analyze and understand how you use this website. These cookies will be stored in your browser only with your consent. You also have the option to opt-out of these cookies. But opting out of some of these cookies may affect your browsing experience.
Necessary Always Enabled

Any cookies that may not be particularly necessary for the website to function and is used specifically to collect user personal data via analytics, ads, other embedded contents are termed as non-necessary cookies. It is mandatory to procure user consent prior to running these cookies on your website.